This story has been reposted in honor and tribute to two remarkable, talented, kind and generous gentlemen who truly loved Revere Beach. Their commitment to preserving and promoting the rich history of America’s First Beach, a National Historic Landmark  is now memorialized and treasured for generations to come.

BOSTON – Speaker of the House Robert A. DeLeo joined Representative Kathi-Anne Reinstein to announce the House of Representatives has passed two bills designating separate memorials on Revere Beach for historian Peter McCauley and artist Norman Gautreau. The two bills are a revision of one (Bill H.2022) filed by Representative Kathi-Anne Reinstein in January of 2011 that ensured areas of the beach would be reserved to honor both men before current development plans were conceived.

Mr. McCauley was a lifelong Revere resident. He graduated from Revere High School in 1941 and went on to graduate from Wentworth Institute in 1943. He was a Navy veteran of World War II and member of the National Association of Disabled American Veterans. He was a State Official for the State Racing Commission at Wonderland and served as Sealor of Weight & Measures for the City of Revere.

Mr. McCauley became the most prominent historian of Revere Beach. A founding member of Revere Society for Cultural & Historic Preservation (RSCHP), he also published seven books about the city and beach’s history including Memories of Revere Beach in 1989. Mr. McCauley was instrumental in organizing the Centennial Celebration of Revere Beach which saw thousands gather at America’s first public beach in 1996. 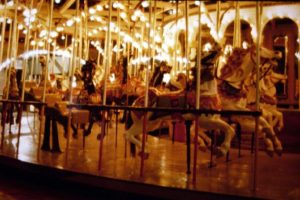 Springtime and Easter at Revere Beach

The Blizzard of ’78 Changed Revere Beach — and Our City — Forever
This woman’s one-piece bathing suit got her arrested in 1907 Annette Kellerman dared to show her legs on Revere Beach.