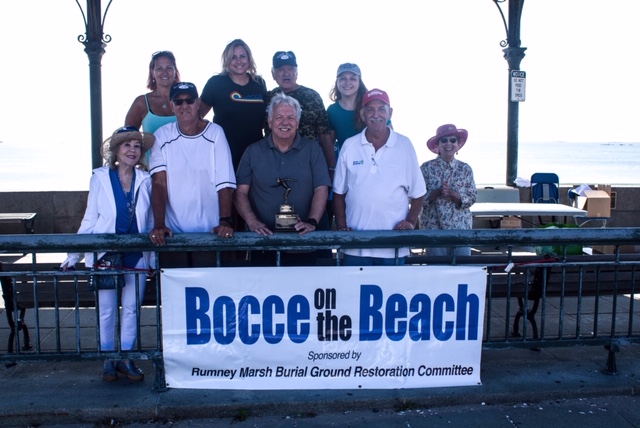 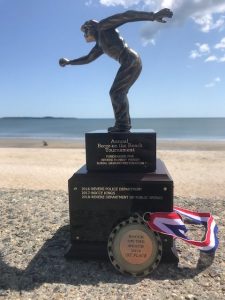 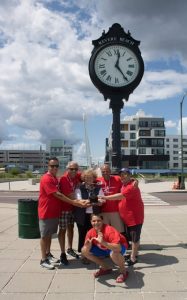 First Place Winners shown here with beautiful Bocce on the Beach Trophy is Keefe’s Ward 4 Horsemen with them is Mrs. Carmela Pagnoni, co-founder Joy of Bocce.

Today was our annual Bocce On the Beach event, a Revere tradition like no other, and it was a great success! We want to thank everyone who participated on the bocce courts – Mayor Brian Arrigo, this year’s champion Patrick Keefe, Steve Morabito, RoseLee Vincent, Arthur F Guinasso, Ed Deveau, Richard J. Serino, Jerry Pearlstein, Brian Cassidy, John Kingston, Eric Lampedecchio, Kathleen Heiser, and all our other participants!

Thanks are also due to our committee members and other volunteer helpers – Bob Upton, Ira Novoselsky, Elle Baker, Pamela M Anderson, Jeff Pearlman, Janelle O’Brien, Brendan O’Brien, Annette Bornstein, Vanessa Mike, Albert Joseph Terminiello Jr, Tom Sullivan, Bill Reedy, Carol Tye  for hanging out with us at the raffle table, and anyone we may have embarrassingly forgot to mention. Thanks also members to Nick Catinazzo and Lona Frongillo for always supporting the RMBGRC and Bocce on the Beach!

The RMBGRC would like to thank all of our sponsors and contributors and especially East Boston Savings Bank who have been financial sponsors of the event for more than 10 years!  Annual Co-Sponsors of Bocce on the Beach are the City of Revere, DCR and the Revere Society for Cultural and Historical Preservation.

We also want to thank D’Ambrosio Brown, LLP for their generous financial sponsorship  as well as our dedicated and most generous Revere food establishments who support us each and every year; Demaino’s, Vinny’s Market and Volare. We also would like to thank Bianco & Sons Sausage who have also supported our event from the very beginning! Thank you to all who support our efforts.

This event is a crucial part of keeping the burial ground, Revere’s historic hidden gem, in such fantastic shape. Thanks again to everyone – looking forward to next year already!!

Join with us at the Revere Society for Cultural and Historical Preservation to learn more about the rich history of Revere and Revere Beach. call us at 781-286 2226   See us on Facebook at Revere History or Rumney Marsh Burial Ground .

A Place to Breathe in a Suffocating Time