It’s a very long walk from one bathhouse on Revere Beach to the next, but the Department of Recreation and Conservation has broken ground on a new bathroom facility and maintenance garage at the halfway-mark next to the State Police barracks on Revere Beach, replacing a former bathhouse that was located on Ocean Avenue. 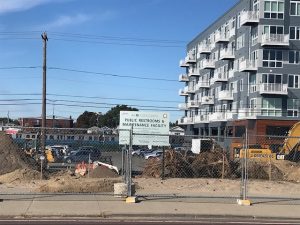 Tuesday morning state and local officials broke ground on the facility with eyes toward having it completed in a year.

The project came about as a partnership between DCR and the city of Revere.

DCR Commissioner Leo Roy announced that the facility will be named for and dedicated to former MDC Police Capt. Arthur (Icy) Reinstein, who was also a former resident of Beachmont.

Roy added that this project is more than 40 years in the making. In 1975 and 2011, legislation was passed (Chapter 841 of the Acts of 1975 and Chapter 183 of the Acts of 2011) authorizing the transfer of state land to the City of Revere for economic development purposes in exchange for the funding and construction of a new Department of Conservation and Recreation (DCR) maintenance facility and the conveying of 89.21 acres of Rumney Marsh land for conservation purposes to benefit the public and ensure habitat for wildlife and plant species.

“We are so grateful for our partnership with Mayor (Brian) Arrigo, with the city councillors, with your economic development department,” Roy said, adding acknowledgement for the support of the Revere Beach Partnership and the historic significance Revere Beach holds as America’s first public beach.

“Revere Beach is one of the commonwealth’s best natural resources,“DeLeo said. “Today we celebrate a maintenance facility. I know that might not be as flashy as I guess, going into the World Series or something like that.