They are two old cities with deep roots in Italy. One is known for its crescent-shaped beach on the cold Atlantic, the other for its scrappy port on the north bank of the Mystic River.

Revere and Everett are now the battleground in a competition between two Las Vegas titans for the sole resort casino license available in Eastern Massachusetts. 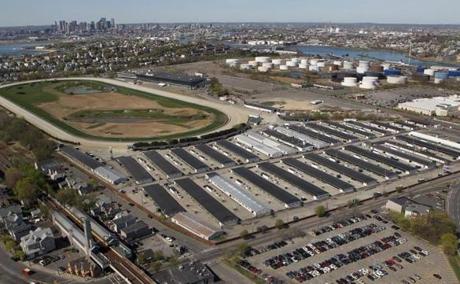 REVERE About one-quarter of the Suffolk Downs property (top and to right of track) is in Revere, and includes part of the track, parking lots, and a 25-acre barn area.

Caesars Entertainment, owner of the famed Caesars Palace, has joined withSuffolk Downs in proposing a $1 billion resort for the 161-acre racetrack site on the Revere/East Boston line.

Wynn Resorts, whose founder built the epic Mirage on the Vegas strip, has an option to buy a 37-acre parcel in Everett to build its own billion-dollar resort on the Mystic River.

Developers have until Tuesday to submit an application for a 15-year license, accompanied by a $400,000 nonrefundable fee, to the Massachusetts Gaming Commission.

The five-member panel can award up to three licenses in the Bay State, but only one is available in the lucrative Greater Boston market.

Residents of the two blue-collar cities will get to decide in a local referendum whether they want a casino development in their community.

“I will campaign against it,” said Evmorphia Stratis, 60, an artist who lives near Everett Square. “Casinos have a very negative effect on a community. Why aren’t they trying to get a high-tech or alternative-energy company on that site?”

“I support it basically for our tax base,” said William Frederick, 61, a retired postal employee who owns two homes in Everett. “If Steve Wynn moves in here, I know we’re going to get a whole chunk of money.”

Revere residents seem equally at odds about the value of a casino in their city.

“If it goes in at Suffolk Downs, we’ll probably move,” said Gail O’Brien, 63, a 40-year homeowner in Beachmont, the Revere neighborhood where part of Suffolk Downs is located. “I don’t want to deal with the traffic, or the types of people who follow a casino.”

“I think it’s good for the community,” said Francisco ­Lizardo, 60, who moved to Revere two years ago from East Boston. “It’s going to bring a lot of work. You need that in these times.”

In a recent address to the North Shore Chamber of Commerce, Stephen Crosby, chairman of the gaming commission, made it clear that a casino would not be forced on either city.

“There will not be a casino in any community that does not want one,” Crosby said.

Meanwhile, those with high stakes in the turf war continue to make their arguments.

“We always anticipated there would be competition for this license,” said Chip Tuttle, chief operating officer at Suffolk Downs. “We’ve always known that in order to earn the license, we’re going to have to [submit] a proposal that sets the standard for gaming development in Massachusetts.”

In an interview, Wynn said he plans to build a hotel tower, with 300 to 500 rooms. Upscale shops, restaurants, a spa, and meeting space will be included, he said.

“It will be a first-class, high-rise hotel,” Wynn said, speaking by phone from his home in Sun Valley, Idaho. “We have the experience and capital to build it. I want it to become one of the top hotels in the Boston area.”

Wynn first proposed teaming with New England Patriots owner Robert Kraft to build a casino across Route 1 from Gillette Stadium in Foxborough, but he withdrew the proposal amid fierce community opposition.

But Everett so far has welcomed him, Wynn said. 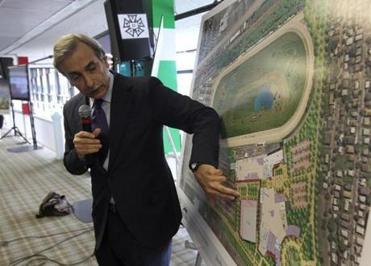 “I sort of felt, after Foxborough, that it would be an uphill battle to find another [community]. But the feeling we got from Everett is that they have a real strong desire for us to go there.”

The casino mogul is no stranger to the North Shore. His father, Michael Wynn, grew up with a foster family in Revere. His mother, Selma Cutner, grew up in a four-family home at 11 Dana St.

“I used to play stickball in the street,” recalled Wynn, 70. “I’d go swimming at Revere Beach with my grandmother. The water was cold. I loved playing in the arcades and all the rides.”

Wynn, who said he still has family in Revere, said he isn’t miffed that rival Caesars is bidding for a casino there. “Nah,” he said. “I know them all over at Caesars. They’re friends of mine.”

It could take up to a year for the gaming commission to decide which casino operator wins the license, and only after each negotiates a financial package with its host communities — including Revere or Everett — to mitigate the impact of a massive new development.

The state’s nascent casino industry is flush with opportunities. Each development is expected to create 2,500 construction jobs and 4,000 permanent ones, according to state estimates.

Along with a hotel, shops, restaurants, nightclubs, and a 24-hour casino, horse racing would continue at Suffolk Downs. The Wynn group is interested in tapping into the convention market.

Along with millions of dollars in taxes and other new revenues, a resort casino would bring sizzle and spark to a couple of down-on-their-luck cities, supporters say.

“This really [could be] a game-changer for the city of Revere,” said Mayor Dan Rizzo, a longtime proponent of expanded gambling in his city.

“He’s talking 3,000 to 5,000 jobs,” Everett Mayor Carlo ­DeMaria Jr. said in an interview last week at City Hall. “Wynn would be the biggest employer in the city.”

Taxes and other revenue sources, such as municipal fees, could top $35 million, DeMaria added. 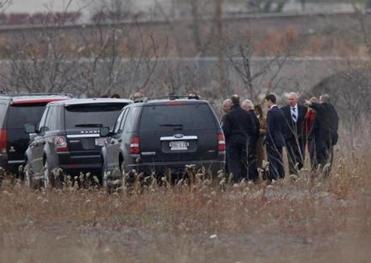 Everett Mayor Carlo DeMaria Jr. and Steve Wynn were among those touring the proposed casino site in November.

But one economist is skeptical that a resort casino would bring a municipal payday.

“A lot of profits generated by casinos leave a region,” said Paul Harrington, director of the Center for Labor Markets and Policy at Drexel University in Philadelphia. “They go back to where the business is based.”

Job opportunities also can be disappointing, he noted.

“The employment impact can be small,” said Harrington, who follows New England labor force trends. “There are not a lot of people who have the skills to be a blackjack dealer. Those jobs are usually filled with people from out of state. It’s the lower-skilled jobs, the hotel and restaurant workers, that end up being filled by the local labor force.”

Still, jobs such as ticket takers and maintenance work could brighten the employment outlook, officials said.

“There will be good-paying jobs,” DeMaria said last month.

Everett has tried, without success, to lure a new development to the former Monsanto Chemical Co. site, which has been idle since the plant closed in 1992. The parcel, valued at $8.8 million, generates $380,300 in annual taxes, according to the city.

About 6 acres of the Monsanto site, valued at $1 million, lie within Boston’s boundaries. Boston Mayor Tom Menino, a strong backer of a Suffolk Downs casino, said last week that any development on the Everett site would have to go through his city. But Wynn said he has an option to purchase only the Everett land. “We’re not using the Boston side,” he said.

In Revere, a resort casino at Suffolk Downs could restore jobs lost when Wonderland Dog Track closed in 2010 after greyhound racing was banned in the state.

“A lot of people had second jobs there for many, many years,” Rizzo said. “That’s where they got their vacation money, their Christmas money, or extra income they needed to live.”

About one-quarter of the Suffolk Downs property is in Revere. The land includes part of the track, parking lots, and a 25-acre horse barn area.

The land is valued at about $12 million, and generates $1.5 million in annual property taxes, according to Revere records.

The hotel, casino, and other new development is planned for the East Boston side of the property. The state gaming law requires applicants that had a parimutuel license in 2010 to continue racing operations for the duration of the license, Tuttle said.

“That would mean a 15-year extension of racing,” he said. “We looked at a lot of different development options. With the premise that the barn area has to stay where it is, initially, there wouldn’t be a lot of development on the Revere side.”

Property, room, and meal taxes collected at the resort would be paid to Boston. However, Rizzo said he is negotiating other payments to Revere as part of the host-community agreement.

“We’re talking about financial payments that would kind of put us on a par with Boston,” he said.

Tuttle declined to discuss specifics of the agreement, but said, “I’m very confident that we’ll reach an agreement with the city that will have extensive benefits for Revere and its citizens.”

DeMaria declined to say how much reinvestment he is seeking as a host city. Transportation, public safety, education, and recreation improvements are among his priorities.

“It will have to be worth it for the people of Everett to have this facility,” he said.