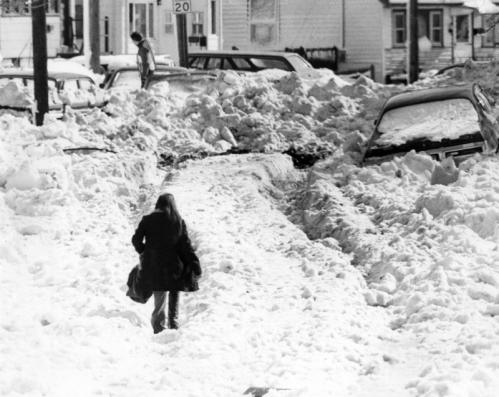 For those of us who remember vividly the Blizzard of ’78, it is something that we never will forget. For four days, the city stepped backwards in time by almost a century. Our way of life that depended on the automobile ceased to exist. People just walked down Broadway or around their neighborhoods, often hidden by the huge snowbanks towering more than 10 feet  that were created both by man and nature. Some neighborhoods, such as Beachmont around Rocky Beach, experienced severe flooding, with houses literally washed away by the high tides and waves that pounded our coastline through three tide cycles over a 32-hour period. The destruction along Revere Beach, which already was in its death knell, was virtually complete. Many of the remaining vestiges of the beach were either ended by the blizzard or were shortly to be taken down.  Some iconic food sites, such as  Danny’s Long Dogs, were relocated, while others, such as Kelly’s, were rebuilt on their same sites. In retrospect, the Blizzard of ’78 can be viewed as the start of the rebirth of Revere Beach, with apartments and condominiums taking the place of businesses. Although the new Revere Beach eventually would take more than 30 years, with many stops and starts, to get to where it is today, culminating with a new Wonderland Station, the start of the condominium phase on Ocean Avenue with high-rise buildings, as well as the taking of land that was turned into a park on Revere Beach Boulevard, can be traced to the immediate aftermath of the Blizzard  Today, almost 40 years later, Revere Beach has risen like the proverbial phoenix from the ashes (or snow-mounds) to become one of the hottest condominium and development markets on the North Shore — and It all can be traced to the wreckage that was wrought in the aftermath of the Blizzard of  ’78.