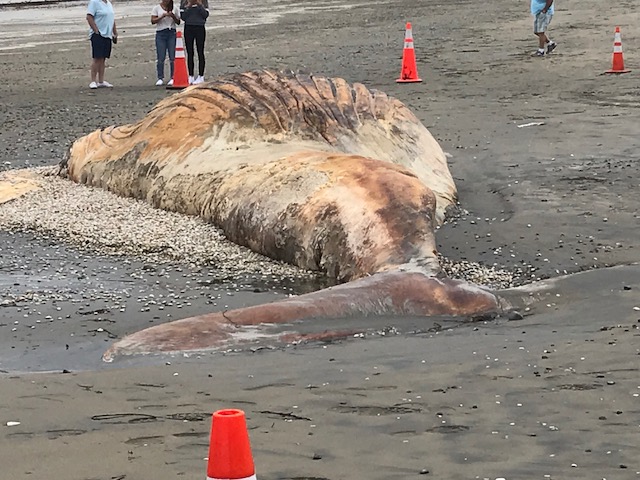 It was an interesting week at America’s first public beach, first, millions of clams washed onshore early last week and on Friday morning a badly decomposing juvenile humpback whale washed up on the beach near the state police barracks.

A curious crowd gathered to inspect the 25-foot male juvenile humpback whale. Some covered their mouth and nose to fend of the smell. It was so badly decomposed that a vertebrae was exposed. Another whale also washed up on Little Brewster Island in the outer Harbor on Friday afternoon.

The juvenile whale on Revere Beach had been floating around the waters for a while, first floating off Gloucester, then washing up on rocks in Cohasset. Officials there decided to pull the whale out into the harbor and it ended up landing on Revere Beach.

Bruce Berman of Save the Harbor/Save the Bay said recent rough seas seemed to have stirred them up. Berman also gave a nod to climate change also having an impact.

On the matter of the clams, Berman said, “they were pushed up on the beach by wind and tide and they die in the sun,” Berman said. “There are tons of healthy clams. I don’t think there’s anything wrong with them involving pathogens or bacteria.

Isabella Russo and Alexa Giannino came to the beach to see the whale.

“It’s amazing I’ve never seen anything like it,” Russo said. “The smell is awful”

TagsCity of Revere DCR Revere Journal RevereBeach.com Save the Harbor Save the Bay